Family : Libelludidae
Common Name : Chalky percher, Blue percher or Ground Skimmer
Status : Common
Location : Wild Wild West, Chestnut Ave, Jurong Woods II, Lornie Trail
This is a relatively small-sized dragonfly that usually prefers to perch lowly on grass. The male has beautiful blue eyes, a blue-grey body with black on the tail. The female has green eyes, greenish body and black markings on its tail. They are quite skittish in the day or late morning. Best time to shoot them is early in the morning while they are probably still sleeping. 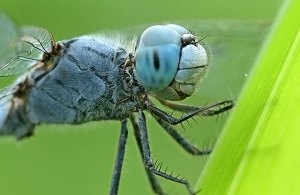 This is easily one of the most common dragonfly species that you can find in Singapore. They are so common that most of the photographers, me included, would give it a miss when seeing them.

A relatively large dragonfly species. Quite commonly found near ponds. I have seen them at many locations such as Chinese Gardens, West Coast Park, Jurong Woods II, Toa Payoh Town Gardens, etc. The appearance of the male and female is almost identical. They are usually quite skittish and not easy to photograph.

This is a common dragonfly species and is easily recognisable by it back and yellow markings on its wings. A beautiful dragonfly that prefers to perch on very thin leaves or stems making it quite difficult to photograph as a slight breeze would cause the perch to swing resulting in motion blur. 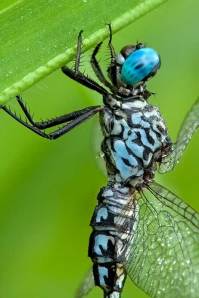 This is a relatively small species commonly found in shrub-dominated streams, canals, drains, ponds, etc. The female is greenish grey in colour while the male has black & white body with attractive blue eyes. I have seen them in the grass patches near Holland Woods and a steam near Segar Road sometime in Mid June 08. On both occasions, I had difficulty getting near to them and did not manage to get good shots. It was almost a year later on 9 May 09 when I revisited Holland Woods, did I manage to get some improvement shots of the male. It was at 7.30 am and this male was probably fast asleep allowing me to go very near to capture some close-up shots as well.

In Mar 2010, I was lucky again to find a sleeping female at Holland Woods.  It was pretty early in the morning and there were some dews on its body giving it a refleshing look.

This is classified as a common species but not many of us have seen or phogographed it in Singapore. The male has beautiful yellowish thorax, a black obdomen with white marking on it. 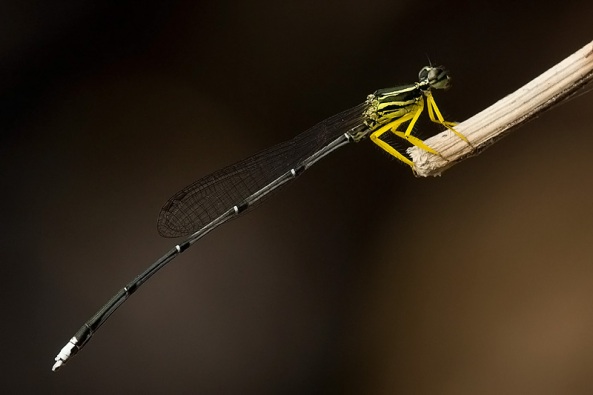 The male was first spotted at a stream near Venus Drive but I did not manage to get any shot as it was difficult to approach. Two males were seen perching in a drain near Segar Road few week later. I managed to get some record shots but was still unable to get closer to it. I finally captured a better shot when I found the male again at a stream along Chestnut Avenue Bicycle Trail. This time, the female which has an overall black thorax and obdomen was also found nearby.

When I revisited the place again 2 day later, a juvenile was found. It has a unique overall white in colour. 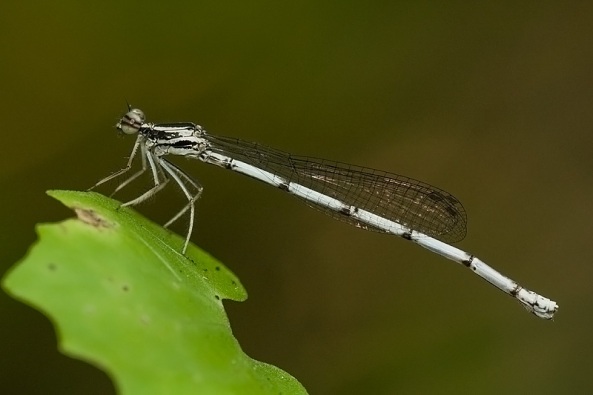 My recent sighting of this species where the juvenile, male, female as well as 2 mating pairs were spotted at a small muddy stream at Jurong Woods II on 21 Aug 2010. 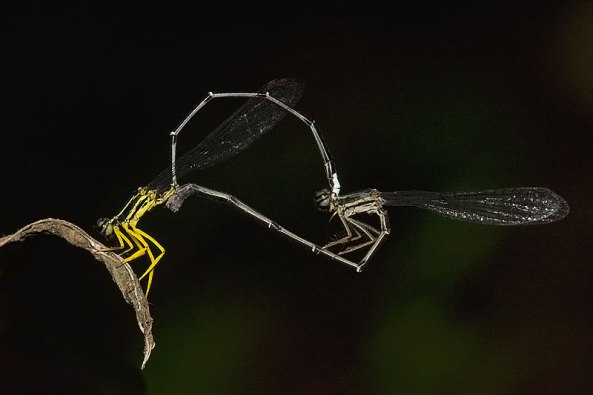 This is classified as an uncommon species but I have seen the males on many occasions such as Venus Drive, West Coast Park, Rifle Rifle Range Nature Trail, Jurong Woods, etc.   They are usually found in sluggish streams & shady drains.  A common species in my opinion.

The male has a a prominent red abdomen with black markings.

The female is thicker and the colour in its abdomen is duller.    The males can be commonly found but not the female.  A very cooperative species which usually perches around the same spot for a prolonged period. 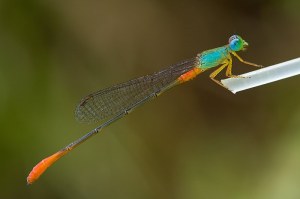 (Venus Drive, 16 Sep 2009)
This beautiful damselfly is the most common species in Singapore. They can be easily found in many of our parks particularly around ponds, drains, canal, open streams, etc. They could also be found in our forested areas. 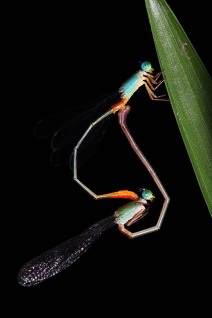 They are relatively big in size and I have seen them, on a few occasions, attacking and feeding on other species of smaller damselflies. Both sexes have similar appearance except that the female has slightly darker marking.

Being common and having a colourful body, they are also the most photographed species. They are quite approachable and get a close-up shot is fairly easy.

(Male – Holland Woods, 8 Nov 2008)
The Crocothemis servilia dragonfly is quite widespread in Singapore. The male has an overall striking red colour while the female is yellow in colour. They are quite big in size and are commonly found in Holland Wood, Sungei Buroh Wetland Reserve, etc.

This is quite a large dragonfly and are commonly found in forested areas. The male has a metallic blue thorax and dark blue abdomen with light blue bands near its abdominal base. The females are less commonly seen which has attractive metallic turqoish abdomen.  This species is easily recognised by its dark patch at the tip of its wings.

(Male – Jurong Woods, 28 Nov 2009)
My first encounter of this species was a male at Bukit Timah Bicycle Trail but I did not manage to capture it in pixel.  My 2nd sighting of the male was at Jurong Woods.  It was cooperative this time and I was able to take some decent shots. 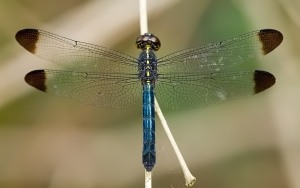 (Female – Venus Drive, 4 Feb 2009)
I was happy to find a female of the species at Venus Drive in Feb 2009. It was perching on a dry twig in the late morning near a stream. It is not difficult to spot as its metallic turqoise body makes it stands out from the dull surrounding. It was relatively easy to get close but the ground condition with lots of dry leaves and fallen branches made it difficult to get a better composition.  In my view, the female looks more attractive to me. 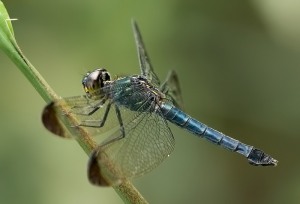